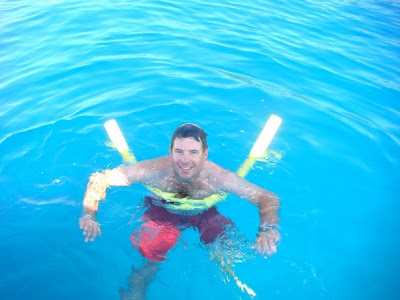 You may have been wondering what ever happened to Weather Vane Brad (WVB)?
Well, fear not. He has been having a lot of fun sailing, surfing, mountain biking, hiking, and playing golf. I haven't put him to work in his usual weather forecasting position because the weather is pretty fabulous and predictable all summer.
However, WVB has a new favorite thing to talk about... how we are going to have a BIG winter this year. So I thought I would share what he has to say. Enjoy the very detailed speculation!
"LETS HYPE IT UP! The word of the year is... EL NINO! For those of you that don’t “hable the espanole” that means… THE NINO!! Just kidding. You may have all heard we are currently experiencing a weak El Nino out in the Pacific Ocean right now. So as follows the real definition of El Nino...

So what does it all mean Basil? El Nino’s typically have large effects on the California winter weather patterns. Weak El Nino’s such as the one that is occurring right now typically only affect weather in Southern California- Causing winter weather to be warmer and much wetter than the average. They have however (on some years) changed weather for Northern California as well. We can say that with a weak El Nino the weather in Southern California will most certainly be affected and that our weather here in Northern CA has a 50/50 shot at a wetter than average winter. (Don’t get caught up in all the HYPE!!) That being said, how 'bout this tidbit: The sun is experiencing an unusually low period of activity or lack of sun spots. This is typically associated with periods of global cooling. The only time period in our history of keeping weather records in which we have had both a weak El Nino along with a period of low solar activity was the winter of 1950-51. That winter the Lake Tahoe basin recorded 800 inches of snow, almost twice as much as last season. (Don’t you love it! Don’t get excited! Don’t hype it up! Don’t start rumors! But look it could snow 800 inches!!!)

Just look at the facts just the facts. A strong El Nino (which is still possible)... will most certainly mean our weather pattern will change for the wetter. We will keep you updated. Lastly, El Nino winters almost always come early. So get your boards waxed! You don’t want to miss this one! (But don’t get caught up in all the hype! Unless of course you are lucky enough to own that crystal ball I look for every day on craigslist)!"

Wow. So there you have it. Enough said.
Posted by Katie Tyler at 3:13 PM