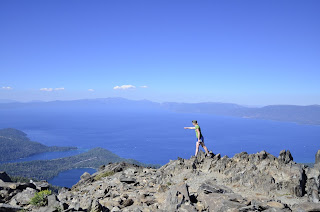 For every season in Tahoe there is a different reason to be outside enjoying what nature and this area brings to us.  In winter, the fluffy white snow brings us outside to ski, sled, snowshoe or build a snowman.  The spring brings us outside to enjoy the tacky trails for mountain biking, the fresh blooming flowers and the warm sun.  The summer holds endless beach days, boating, camping and swimming.  In Tahoe, fall is the perfect time of year to head up into the mountains for a day hike. 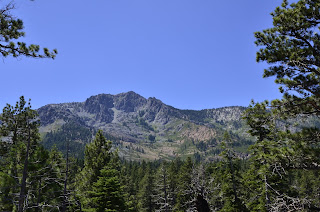 One of my favorite Tahoe hikes is the Mount Tallac trail.  This trail is located on the south side of Lake Tahoe just past Emerald Bay, about 5 miles if you are heading south on HWY 89.  Mount Tallac is 9,734 feet above sea level and is the 12th highest peak that surrounds Lake Tahoe’s shores.  This is no easy hike with 3,000 foot elevation gain in the 5 miles to the top but the views are worth it.  The trails starts by meandering through the forest with a spectacular view of Fallen Leaf Lake on the left. 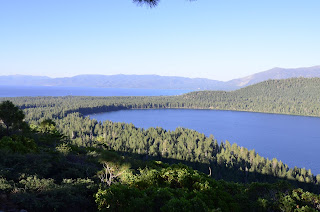 On the way up you will also pass Floating Island Lake and Cathedral Lake. After Cathedral Lake, the trail emerges from the forest to switchbacks as you approach the summit.  Once you make it to the top, your tired legs will thank you as there are jaw-dropping views in every direction. Fallen Leaf Lake, Freel Peak, the Carson Range, Echo Summit, Highway 50, Ralston Peak, the ski runs at Sierra-at-Tahoe, Pyramid Peak, Desolation Wilderness, Gilmore Lake, Susie Lake, Dicks Peak, Twin Peaks, High Camp at Squaw Valley and Granite Chief can all be seen but Lake Tahoe steals the show.  As you are perched on top of this large rock pile looking over the top of Big Blue, you will be proud of yourself and see that every step up was worth it to be where you are. 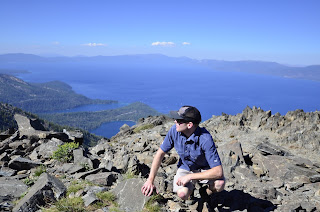 Be prepared, it will take about 6-8 hours round trip depending on how fast you go.  Pack lots of water and food and start early because the fall equinox is now behind us and the days are getting shorter.  It’s time to maximize the crisp fall days and set aside a day to explore Mount Tallac. 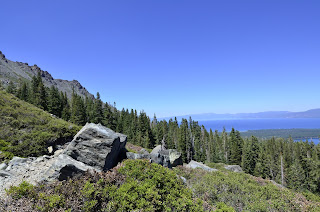 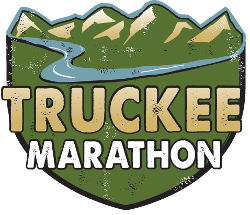 This weekend marks the first year of a new tradition for Truckee.  The Truckee marathon will hold its inaugural marathon, half marathon and marathon relay this Sunday, September 25th.  The start and finish is in the heart of historic downtown Truckee. The race will be showcasing much of the progress that the town has been making on the Truckee Trails & Bikeways Master Plan (a 10 year vision for trails in the town of Truckee). 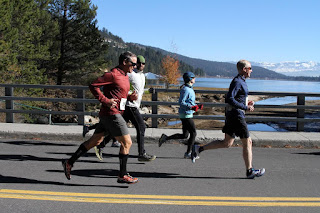 To start, racers of all distances head out west towards Donner Lake and make a complete loop around the lake. The next phase goes up to Tahoe Donner where racers will run on the recently completed Trout Creek Trail that connects the neighborhood with a Class 1 bike path to the downtown Truckee community.  The half marathoners finish at the bottom of this segment and the marathon continues on a single track trail towards Gray’s Crossing and Old Greenwood where the course then drops racers in to the Glenshire community.  The path circles back on the Legacy Trail along the Truckee River with a finish line back in Historic Downtown Truckee. 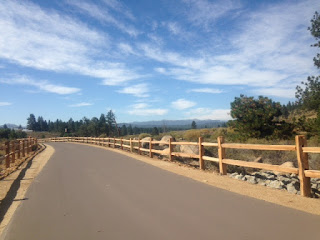 The views capture the best of the Truckee area including Donner Lake, the Truckee River and the endless vistas of of surrounding peaks.  Truckee really is a special place.  Thanks to tremendous community support and fund raising efforts, these trails are linking all of Truckee together.  Sunday’s race will make for a memorable run around Truckee with the support of Big Blue Adventures, organizers of the race. 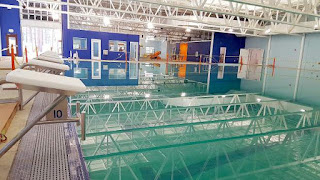 After years of planning, fundraising and months of construction, the new Truckee Aquatic Center is now open. The $9.2 million dollar facility is a valuable asset to the community. The Aquatic Center is 26,000 square feet, beautifully designed and well laid out with a wide variety of options for everyone. The main pool is a 25 yard competition pool with 10 lap lanes with race starting blocks. There is also a diving board and basket ball hoop for open swim times. 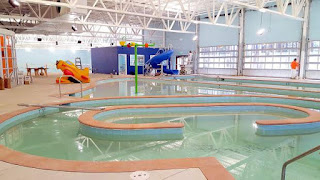 The second pool is heated to 90 degrees and will serve senior fitness, lessons, and those rehabbing from injuries. The adjacent swim area is made for fun with a beach-like entry, a lazy river, a splash pad and two water slides including a 12-foot spiral slide as well as an airplane-shaped slide for small children. Sound fun? There is a special events room that looks out to this pool that will be perfect for birthday parties.
Another special part of the building is a tribute wall to Debbie Myers, a Truckee local and the first female Olympian to win three gold medals in Mexico City, 1968. An inspiration to all who come to swim and play here.

If you haven’t checked it out yet, swing by and take a look. Even better? Jump in! 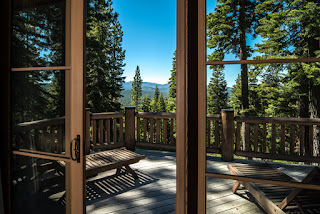 Through these updates, it is our intent to bring you insights into the market dynamics behind the simple number of sales and average pricing. Occasionally, however, the figures speak for themselves. 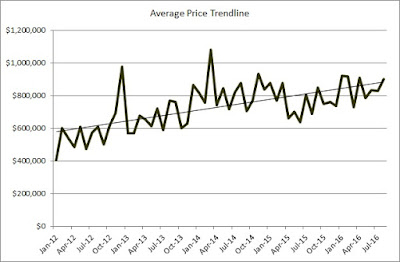 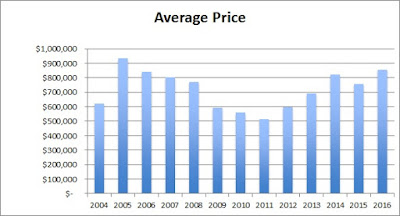 Perhaps most remarkably, this exceptional 30-day period comes just ahead of the typical surge for Tahoe-Truckee homes sale. Under normal market conditions, consumers will shop for real estate through Labor Day before making a purchasing decision in anticipation of the winter season to come. As such, September and October are most often the peak months for real estate closings in our region. With over 200 transactions currently pending, September appears to be on a similar trajectory. 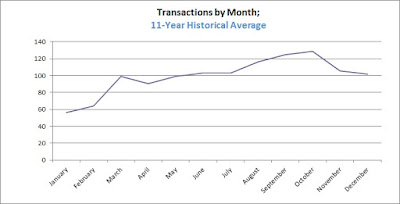 Despite this strong absorption, there remains ample inventory of over 9 months supplying the market. It is not unreasonable to expect some cooling as we move beyond the current landscape. The same normalized market conditions that show surging sales over the next 60 days indicate a steep drop off from November – January. Similarly, election years generally create some level of paralysis for discretionary purchases including resort real estate. Particularly in a year as volatile as this, some level of market uncertainly can be expected. Finally, surging conditions like we are now experiencing are often followed almost immediately by a cooling. Without the major debt overhang of a decade ago, this cooling is likely to be a leveling of prices and slightly extended market time rather than more significant impacts in the not-too-distant past.

Fall is arguably the best time of year in Lake Tahoe as warm weather and crisp night make for ideal recreation. We hope you are able to join us as we squeeze every bit of enjoyment from the season. 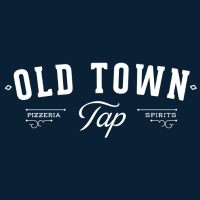 Truckee’s newest restaurant, Old Town Tap, is located in historic downtown at the end of commercial row. Husband and wife team Marlena and Luke brought their Bay Area restaurant background to Truckee and have opened up great place to stop in for a drink and enjoy lunch or dinner. Pull up a barstool at the bar as the garage style window is open at the front letting the fresh air in. "What will it be today?" the bartender asks. The choices are endless with 16 beers on tap, 12 wines on tap and Luke, the bartender, perfecting his cocktails more and more each day. 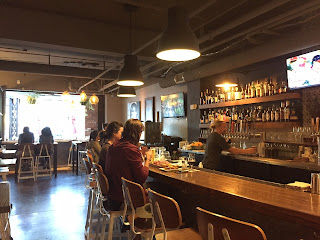 On the food front everything is suitable for sharing or for an individual meal. The environment, menu and service is perfect for going out with a group, a nice lunch, or on a private date night. The Di Stefano Burrata is a perfect starter, deliciously silky burrata cheese served with flat bread. The watermelon salad is cool and crisp with surprisingly deep flavors. The specialty pizza menu is expansive, creative, and delicious. Dessert is a must- try the soft serve ice cream which is from the specialty Petaluma family farm, the Double 8 Dairy. 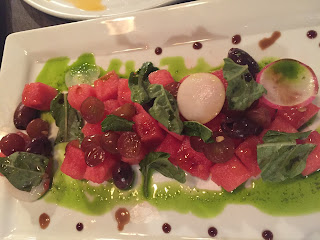 It is completely worth checking out Truckee's newest culinary hotspot to enjoy some creative flavors and a charming setting. 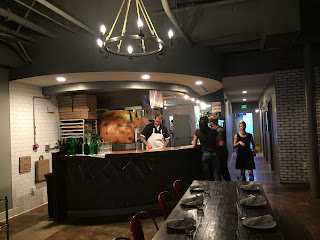 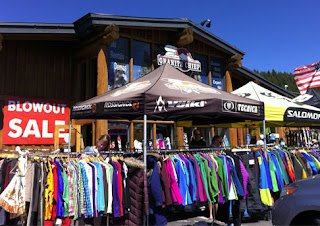 Who doesn’t love the annual Labor Day tent sales? Don't miss the opportunity to get some great gear as most Tahoe sports stores will mark down all their prices for the holiday weekend. There is no better way to get excited about the upcoming winter than to find the perfect addition to your winter ensemble at a bargain price.
Northstar will take over the entire roller skating rink in the VIllage to fit in all their discounted merchandise. Start Haus in Truckee has their own spin with a consignment sale in conjunction with their tent sale. With all those growing ski racers, this is a great way to buy, sell and keep the kids hitting the slalom course. The Village Ski Loft is hosting their 42nd annual Labor Day sale where you will find more than just unbeatable deals. Be one of the first 50 customers and receive a free t-shirt or enter the raffle for a chance to win a season pass to Diamond Peak or Mt. Rose.

Get started early, you have a lot of stops to make. Visitors and locals alike will be looking for blowout prices all over town this weekend. 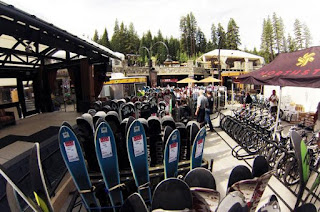 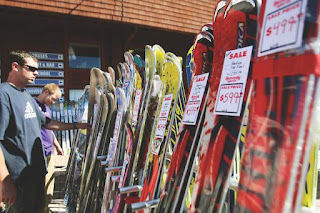