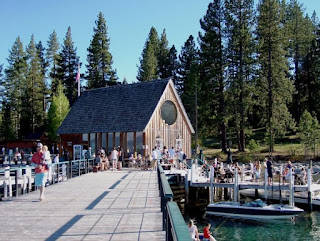 Time to open up the summer cabins, put the boats in the water and start having fun! Each weekend there is a party to attend as the lakefront restaurants start to open up the decks and celebrate summer in true Tahoe style. Check the dates below and find out where to be as the North and West Shores of Lake Tahoe’s best water front venues blossom into summer. Whether it’s a Sunnyside Mai Tai, a Chamber’s Punch or a Garwoods Wet Woody, sitting on the deck with Lake Tahoe as your backdrop is something to be experienced.

Chambers Landing Bar and Restaurant Opened May 12 just in time for Mother’s Day. With the bar perched out on a dock and accessible by boat, this is one of Lake Tahoe’s oldest bars. 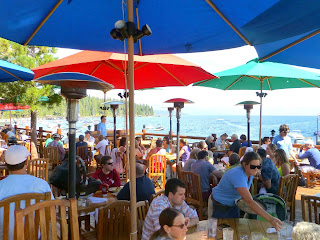 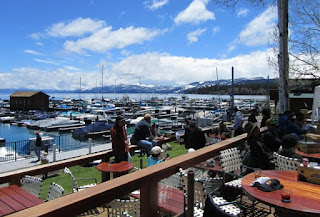 Jake’s on the Lake will kick off the deck season Friday, June 3. With live music from one of Tahoe's best bands-Ike & Martin, it is sure to be a fun party. 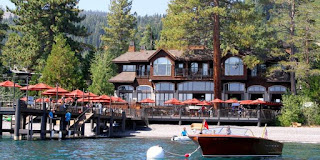 West Shore Café will be hosting their annual Deck Opening Party on Sunday, June 12 from 11am to 9pm. By this time the gorgeous summer weather should be upon us and this will be a perfect stop while boating on the lake. 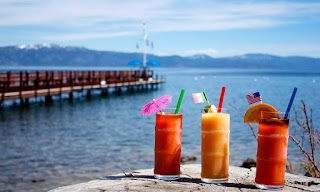 Garwoods deck is always open depending on the weather.  Come by boat or land and enjoy the deck and the wide open doors that blend the inside and out.

Posted by Katie Tyler at 9:38 PM No comments: 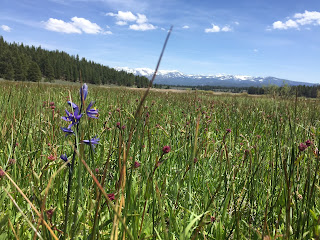 After a snowy white winter and a rainy wet April, Tahoe is glowing green again.  This is quite refreshing after a few dry years.  I am having a great time getting out, breathing in the fresh clean air and seeing the beginnings of what we have in store for us this summer.  The leaves on the trees are starting to grow thick, the flowers are starting to open up, the rivers are raging with water and there are many blue bird days to be enjoyed. 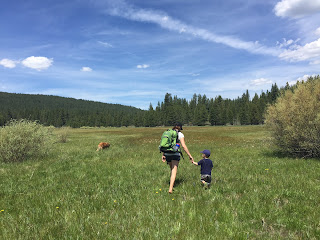 My most recent adventure was a walk out at the Donner Camp Picnic Ground.  Located just a couple miles from Truckee on HWY 89N, this is great for the whole family.  There is plenty of parking, picnic tables tucked away under the trees, bathrooms and a 1/3 mile interpretive trail.  The trail is mostly gravel and wide enough for a stroller.   Follow the path as it winds through the meadow and over the marsh on a long wooden boardwalk.  Along the way you can stop at the trailside signs to learn about the Donner Party members that spent the winter of 1846-47 trapped at this location.  This is the site of a tragedy, but also a major part of history in Truckee. 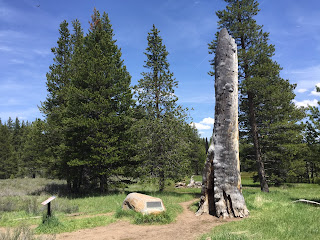 When you get to about half way on the trail, just before it starts to wrap around to head back to the start, look for a small trail by the placard rock and old dead tree base.  Take this trail out to the meadow.  The trail will fade away but just look up and take all the views in, they are incredible.  If you are feeling adventurous, keep walking through the meadow to find rivers splitting in every direction, ospreys soaring in the wind, chickadees building their nests and Prosser Lake. 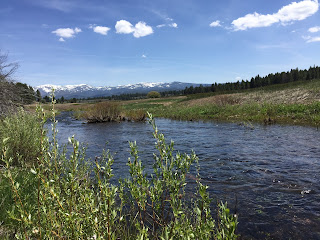 For a longer option, the Emigrant Trail runs right through the parking lot.  Take it in either direction.  Head North for about 10 miles to get to Stampede Reservoir or South for about 2 miles where you will hit Prosser Reservoir. 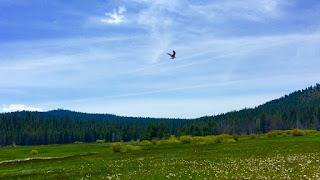 The trails are endless and the beauty right now is breathtaking.  Get out and explore this little known stop in Truckee.

Posted by Katie Tyler at 1:22 PM No comments: 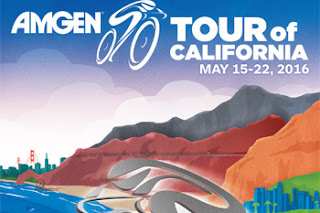 The 2016 Amgen Tour of California returns to South Tahoe again this year making the 11th year threading cycling’s elite riders, both women and men, from San Diego to the Sierra Nevada through the heart of California. The Amgen Tour makes for some great spectating. If you can catch the peloton sweeping by make sure to have your camera out and set to a high speed setting to capture the riders as they whirl past you at speeds varying from 15 – 55 mph. Or just bring your cow bell to cheer them on. 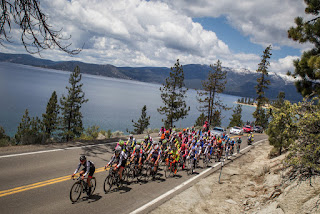 Head out on Thursday, May 19th for the 5th stage of the 8 stage race. The riders will start in the beautiful vineyards of Lodi and ascend up to Lake Tahoe. The race will finish at Heavenly Ski Resort and reach a peak elevation of 8,600 feet - the highest elevation in race history. There will be an event festival including entertainment, food, drinks and everything bike related at the Heavenly Village starting at 10am. Come join the excitement and watch the women’s stage finish at approximately 2 pm and 3:45 pm for the men’s stage finish at Heavenly Ski Resort in South Lake Tahoe.

Posted by Katie Tyler at 3:25 PM No comments: 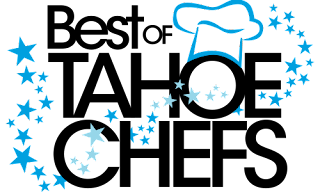 One of Tahoe's favorite fundraisers, Best of Tahoe Chefs, is coming up and is hosted at the Ritz Carlton, Lake Tahoe. Benefitting the Gene Upshaw Memorial Tahoe Forest Cancer Center for patients, family and caregiver programs, this is a great event for a great cause. 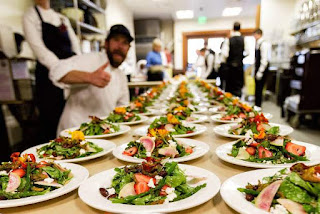 Each year some of the best chefs in the region come together to present a night full of mouth-watering food. This year, Scott Yorkey of Jake’s on the Lake will come together with 24 others including William Burns of Moody’s Bistro Bar & Beats, Robb Wyss of Sunnyside Resort and Brett Mosley of Martis Camp to present the evenings fare. 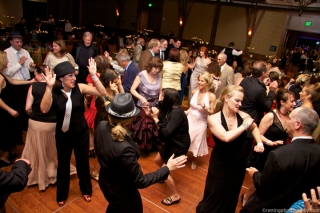 The theme is “A Night of Magic".There will be a live and silent auction along with a range of culinary experiences that you won't want to miss.  To top off the event, there will be music and dancing.

Sure to be a sell out event, get your tickets today!  If you can’t be here, consider a ticket donation that will benefit ​a cancer patient.

Posted by Katie Tyler at 1:08 PM No comments: 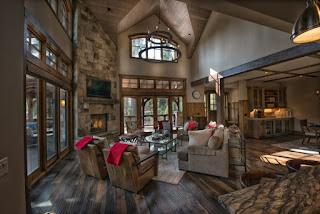 For generations of consumers waterfront property has been the gold standard of prestigious Lake Tahoe real estate. The finite supply of privately owned lakefront parcels combined with the legendary tales of the characters who owned them created the rarest of air in this mountain environment.

As lakeside properties have aged, combined with a restrictive regulatory environment, new and exciting planned communities have emerged with Truckee addresses that have created an entirely new definition of luxury. Offering open space, direct connection to skiing and comprehensive amenity packages, these communities have appealed to a new generation of consumer for whom Lake Tahoe waterfront has become a nice-to-have but hardly an essential part of the equation.

In April 2016 alone, 11 properties in the Tahoe Truckee region traded for amounts greater than $1,500,000. Of these, 9 were in communities in the Martis Valley versus just two in the Tahoe Basin. Martis Camp alone transacted 6 home sales including a record high $8,900,000 for a property backing to neither skiing nor golf; rather National Forest offering the most immediate possible connection to a world of recreation. In all of 2015 there were only 11 lakefront sales on the north and west shores of Lake Tahoe.

Beyond Martis Camp, Northstar’s Mountainside saw a $3,500,000 closing within the Stellar Collection providing a substantial value on slopeside living.  Lahontan and Schaffer’s Mill similarly participated in the region’s surge of activity in the luxury segment.

The overall Tahoe Truckee market continues on a strong pace for 2016. While the number of transactions fell 5% month over month; a phenomena typical of the season, average price is soaring by 16% largely driven by the sales references above. From April, sales typically grow progressively through October. This trend was exacerbated in 2015 by a lackluster winter causing a lackluster first half only to see momentum soar in the latter half.

At the end of a strong comeback winter, a more gradual growth curve is likely. Nevertheless, market conditions continue to indicate steady growth in the months to come.

A series of late spring storms have created a unique circumstance whereby the end of skiing and the opening of hiking, biking and golf season have blurred. Regardless of the sport, spring promises to be exceptional.