Greetings -
The Tahoe Truckee real estate market has shown terrific progress through three quarters of 2013 with every micro-market posting significant gains in either value or sales velocity, or in many cases, real improvement in both. Many seasonal patterns "typical" for Tahoe have been either accelerated or condensed in this active year. As the chart below shows, the number of transactions have not only well exceeded the eight year average but the typical fall surge appears to have manifested early with 431 closed transactions in the 3rd quarter. August – September – October are typically the busiest three month stretch for closed transactions however the past 90 days exceeded any other combination of months since 2005. 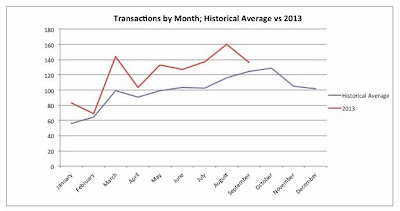 There are many likely factors contributing to this phenomenon.  The first and most obvious is a continued display of the high level of demand for real estate ownership in Lake Tahoe and the lifestyle benefits that come along with it. Rising interest rates combined with accelerating values have created some real urgency to purchase before purchasing power is further compromised. Limited inventory only compounds these conditions.
Overall, the region saw 5.3% more sales in the 3rd quarter than the same period in 2012.  Median price has jumped by 13.8% providing a steady metric for the market in general. Average price can be better barometer for improvement in the luxury category allowing the loftiest values to drive this category up 22.9% from Q3, 2012. Further validation of a soaring luxury segment is the pace of sales greater than $1,000,000 of which 49 have recorded year to date versus 40 a year ago. 6 properties have sold above $5,000,000 where the highest recorded price through September, 2012 was $4,600,000.
An historical look at both median and average price indicate that we are well into recovery: 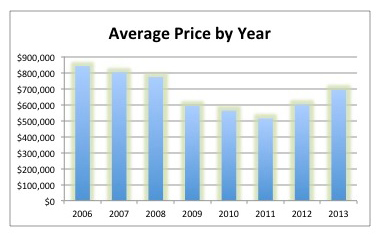 If we are truly in an accelerated version of a typical sales year, it would not be surprising to see a slight regression in the number of sales for each month in the 4th quarter. Inventory is balanced with six months supply currently available however  asking prices have risen dramatically providing (rightfully) increased confidence on the part of sellers. Using a very limited example, sellers of vacant land between Gray's Crossing and Lahontan, where sellers have observed 126 lot sales (a 315% increase over the same period a year ago) and a 37% increase in median price, increased asking price by 44% in just the 90 days between July and the end of September. At some point there will be a disconnect between buyers and sellers until some there is some movement from one group or the other to bridge that gap. There are currently 232 sales pending throughout the region, including eight at asking prices greater than $2,000,000, representing a very slight downtick from previous months. A brief lull during the shoulder season could be quickly quelled when consumers return en masse for the ski season and begin seeking out mountain homes, particularly those based around skiing. The first quality snowstorm of the season is often the trigger for such activity.
September, 2013 was particularly active at the highest reaches of the Tahoe market with eight sales greater than $2,000,000 including three lakefront properties above $5,000,000 with another just below at $4,700,000 represented by Tahoe Mountain Resorts. Two homes in Martis Camp traded above $4,000,000 with another pair in Old Greenwood and Lahontan at $2,350,000 and $2,000,000 respectively.
The final quarter of 2013 should demonstrate a continued recovery that moves values closer to previous highs and provides a solid platform for the year to follow. We'll be sure to keep you updated as the market evolves.