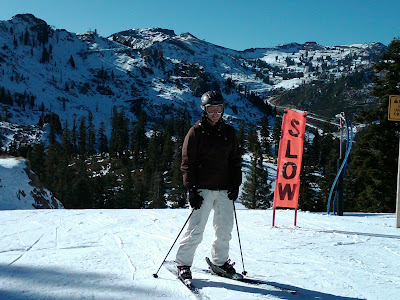 I ventured out to Squaw on Wednesday to ski the lone run that was open on Red Dog and really, it wasn't bad! I will say that it does not appear that Squaw has run their snow making equipment one time this season but they are getting away with it.

Northstar is undoubtedly the place for early season skiing. They have been diligently blowing snow and opening as much terrain as possible. I believe it because the riders are sure looking happy when they come down at the end of the day.

Fortunately, we won't have early season conditions for much longer.........

There is some serious hype going on up here this week about some inbound snow. Nobody seems to be able to tell us exactly how much we are going to get. I have heard as little as 2 feet and as much as 15 feet. That is quite a swing...

I haven't made the move to stock up on survival supplies at the grocery store yet, but that may be a mistake. I might reconsider tomorrow when hopefully the weather people can decide what is going on.

We are under a Winter Storm Watch, looks like about 2 feet possible Sun-Mon and then the next storm seems to be the doozy. They say "significant snow amounts possible" (15 feet??).

Weather Vane Brad?? Regarding the next few days??

Temps will be so cold that what does fall will be of the light powdery stuff they always brag about in Utah, and Colorado thus it could pile up faster than most storms do in our area. Early estimates are 12 inches up to 2.5 feet. I know very vague but for whatever reason these changes are puzzling the experts. Because this system is associated with such a strong cold front coming out of the Gulf of Alaska if skies clear by Monday evening (which they should) we could have some record low temps for the Truckee area, easily below 0!

Wednesday brings more changes. The Jet-Stream takes aim at California this time with several systems lined up. Most are packed with sub-tropical moisture so we should see more precipitation and higher snow levels. Two model solutions out there one is colder and drier the other being warmer and wetter due to it being influenced by the remnants of a tropical typhoon. What we want is the drier solution as it will still have plenty of moisture and snow levels should remain below our resorts base areas.

Either way it all looks fun. Love the changes! Go get your fat skis and boards tuned it looks like we will need them for the next couple of weeks.